A field experiment was conducted during the season 2017-2018 in Al-Jadwal Al-Gharbi district - Karbala governorate, which is about 22 km away from the center of the province to study the effect of three dates for the addition of nitrogen fertilizer(T1= Adding fertilizer in two equal batches when planting and at elongation; T2= adding of fertilizer in three equal batches when planting, elongation and bushing; T3= adding of fertilizer in four equal batches when planting, elongation and bushing, and flowering) in the growth and yield of six cultivars of bread wheat (Rashid, Ibaa 95, Ibaa 99, Abu Ghraib, Tamooz 2, Tahadi). The randomized complete block design (RCBD) was used with three replicate.The results showed the superiority of treatment T1by giving the highest rate of flag leaf area (39.89 cm2) and the number of spikes (284.7 spikes m2). T3 treatment was superior to the highest plant height (100.17 cm), the number of grains in the spike (41.61 spike - 1) and the weight of 1000 grains (36.33 g) and the grain yield (4.23 tons ha-1). The results also showed the exceeding of Tamooz 2 by giving the highest rate of flag leave area (46.67 cm2), spikes number (314.0 spikes m-1), grain number in the spike (45.11 grain spike-1), and grain yield (5.02 ton ha-1). 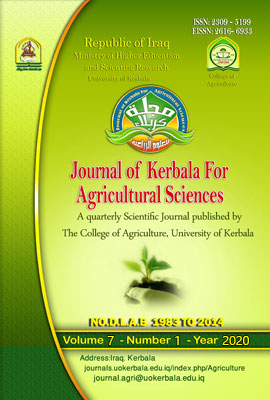 Most read articles by the same author(s)

Obs.: This plugin requires at least one statistics/report plugin to be enabled. If your statistics plugins provide more than one metric then please also select a main metric on the admin's site settings page and/or on the journal manager's settings pages.
Make a Submission