The current study investigated some activities of chemical compounds which separated from Cuminum cyminum seeds and tested for their antibacterial activity against three types of bacteria that are pathogenic to humans and plants: Staphlococcus aureus, Escherichia.coli, Agrobicterum rhizogenes. The fatty acids were obtained after the soaponification process from the Petroleum ether extracted cumin seeds were separated by Soxhleet and diagnosed using (GC-MS) The volatile oils produced from cumin seeds were also separated using a Clevenger axis steam distillation device. Results, revealed that, cumin seeds are rich in with fatty acids, and this was indicated by the diagnostic results using GC-MS technology, as eight fatty acids were separated from the petroleum ether extract of cumin, including Octadecadienoic acid. Hexadecanoic acid, while the results of (GLC) showed the presence of the Cuminaldehyde in the separated oil, and that all of these compounds showed a high inhibitory effect against the bacteria used under study using the inhibitory activity test (susceptibility test) by drilling and estimating their inhibitory concentrations compared to the antibiotics used under study. 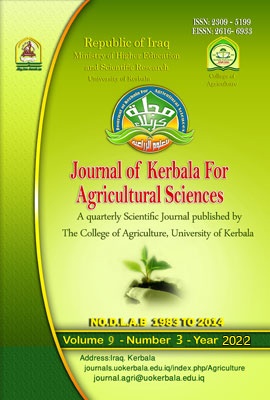